Donate to the Feed the Hungry Benefit: 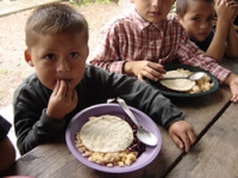 I have always wondered why there are so many people in the world starving. While more food is wasted than consumed in the United States, people from many countries like Honduras never know where their next meal is coming from and many work ten hours a day just to bring home five dollars if they have a job. With this money, they have to feed up to 12 people. IMPOSSIBLE! This is why we felt that we had to do our part in helping these suffering people.

In the early eighties, starvation in Honduras was at the highest level in history. War had broken out in Nicaragua and thousands of refugees crossed the border into Honduras. These families built small huts where you would find up to 15 people living in one room. Bob and Joan Tyson were in Honduras establishing the work there as the war raged in Nicaragua. While Bob would be out preaching or training young men to be pastors, many women would bring their sick babies to Joan begging for her help. Almost every day, there would be processions walking behind a small wood box with a child who had died from some disease related to starvation. What could they do? They did not have the funds to feed all of this children. When they could, they would help but the need was just to great.

In November of 1983, God gave Joan an experience in the village of Azacualpa, Honduras, that would change her life forever. Bob was invited by one of the national pastors to preach and Joan taught the Sunday school class out under a tree. There must have been 200 children in her class. After church, the pastor invited Bob and Joan to eat. He went out and bought two hot Pepsis, two tortillas and a can of hot sardines. There was no electricity in this village and that was all he could find. As they sat there, her eyes were drawn to a little girl under a large tree. She was peeling a green grapefruit but she never took her eyes off Joan. Joan believed the Holy Spirit used that little girl that morning to speak to her heart. This little girl had no clothes but Joan was wearing a dress. She was barefoot while Joan had on a nice pair of shoes. All she had was a green grapefruit to eat while Bob and Joan feasted on hot sardines and cold tortillas. Joan wondered if in this little girls mind she asked “DOES GOD LOVE THE MISSIONARY MORE THAN HE LOVES ME”

Probably none of these thoughts entered this little girl’s mind but Joan believed that the Holy Spirit used her to bring a truth home to her heart. It was becoming very difficult to teach these children about the Love of Jesus when they were feeling hunger pains. The next week, the pastor of the Azacualpa church came to town to buy lumber to build coffins for that little girl and two more that had died of starvation. Joan could not sleep for many nights, thinking about how she could help feed some of these children. One day, she was reading the Bible when she came upon a verse in Proverbs 19:17;

“He That Hath Pity Upon The Poor Lendeth Unto The Lord; And That Which He Hath Given He Will Repay.”

Feed the Hungry was started in the heart of Joan Tyson. After writing a simple letter to friends and churches in the United States, donations started coming in and immediately the first FEED THE HUNGRY KITCHEN was opened up. Never did she imagine that twenty years later, there would be 35 Feed The Hungry kitchens with more than 3,000 children eating a good hot meal everyday. Our kitchens are now a refuge for hungry children. Never is a child turned away if he is hungry. He is taught that Jesus loves them and He want them to have food to eat.

Just as God was touching the heart of Joan Tyson in that hot village in Honduras in 1983, He was already preparing the hearts of people in the United States to give and make this program a reality. As more donations are received, more children can be fed.

But A Certain Samaritan, As He Journeyed, Came Where He Was: And When He Saw Him, He Had Compassion On Him, And Went To Him, And Bound Up His Wounds, Pouring In Oil And Wine, And Set Him On His Beast, And Brought Him To An Inn, And Took Care Of Him. Luke 10: 33-34